Derby Plus One Arts And Culture Program

In December 2013, Barnardo’s joined forces with Derby’s major cultural institutions to launch the Plus One initiative. Set up in order to give children in care the opportunity to experience live performance, film and creative workshops in the city, the scheme has seen a number of successes in the following months.

Citizens’ Eye met up with the key people involved in the initiative from Derby Theatre, Déda, Derby LIVE and QUAD to discuss the origins of the Plus One scheme and how it is shaping up for the future. We also spoke to Derby County’s Shaun Barker and representatives of Barnado’s and heard their perspectives on the scheme and why it is such a valuable enterprise for children in care living in Derby.

For more information on the Plus One scheme please visit the following websites:

To hear more about Derby Deda’s Plus One Ambassador

To find out more about fostering through Barnados 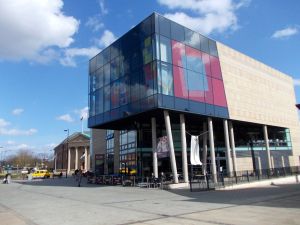 We’re pleased to announce that we’ll be running outreach media sessions at Derby Quad on the first Tuesday of the month.

We’ll be at Quad from 10am-2pm on the following dates:

So, come and meet the team over coffee and find out how you can make and share short films, audio shorts and blogs about you, your community, and the issues that mean something to you.

To book a session or for more information contact the team on 01332 346266 email citizenseye@communityactionderby.org.uk
or find us on twitter @derbyeye

The Citizens’ Eye Derby team were invited to film aspects of  Festé 2013. Festé is an international arts festival that takes place in Derby. It brings internationally recognised artists to the streets of Derby in September each year.

Festé is organised by a consortium of four local arts providers in the city; Derby Quad, DEDA, Derby Live and Derby Theatre. It is funded by Without Walls, a national street arts consortium funded by the Arts Council.

Alex Rock from Quad explains what Festé is and why it’s important for the people and diverse communities of Derby.

Local arts groups have the opportunity to share the billing too. Our team spent time following two local community dance groups who were involved in Festé; Hoverla, a Ukrainian dance ensemble, and Surtal Arts, a South Asian Arts dance development agency. We wanted to understand how and why they were involved, and what being involved in Festé means to Hoverla and Surtal Arts, and members of the Ukrainian and South Asian Arts communities.