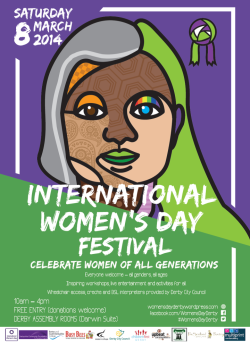 International Women’s Day is a coming together of women from all backgrounds and cultures to celebrate their experiences and achievements through the ages and up to the present day. These diverse events from across the globe celebrate women in roles such as politics, economics, social and family matters, the arts and entertainment.

In March 2014, Citizens’ Eye Derby met with organisers Vanessa and Sonya along with a variety of contributors to International Women’s Day in Derby and discussed what the day meant to them.

Patricia spoke to us about the importance of Women’s Guilds and Cooperatives which pre-date the Suffragettes. Francis from the Derby Museum spoke of the role played by women in The First World War and the subsequent changing attitudes, while Carla from the RAF discussed women in the RAF today.

Angie from Derby County Football Association spoke about the wide range of sporting activities available to people of all ages, while Bianca from No More Page Three discussed the objectification of women in the media.

If you would like to get involved with future International Women’s Day events get in touch with Women’s Day Derby or check out their Facebook page.

We’re pleased to announce that we’ll be running outreach media sessions at Derby Quad on the first Tuesday of the month.

We’ll be at Quad from 10am-2pm on the following dates:

So, come and meet the team over coffee and find out how you can make and share short films, audio shorts and blogs about you, your community, and the issues that mean something to you.

To book a session or for more information contact the team on 01332 346266 email citizenseye@communityactionderby.org.uk
or find us on twitter @derbyeye